How do you calculate your charge stability diagrams?

I have a question for quantum dot people:

This is the way most groups I know calculate it - it makes the value robust towards being really unlucky with the direction of your charge transition line. However I was just discussing with a colleague and all the exp groups she works with tell her to take only one gradient instead of averaging the two directions (for example just: \frac{\partial I}{\partial V_{PG1}}).

Is there some convention of when people take average and when only one derivative? Is there a good reason to do one over the other?

This is not the answer you’re looking for probably since I don’t measure conductance in my group, but maybe is just another perspective. When I measure a double quantum dot, I use high frequency (GHz-level) resonators connected to the plunger gates of one of the dots. This resonator’s resonance frequency is perturbed by the ‘parametric capacitance’ of the double dot, given roughly by edn/dV_PG for that dot (where n is the electron number expectation value for that particular dot) which we indirectly measure. Hence, in my case, it is really true that we only measure the derivative of charge along a specific plunger gate axis (as described eg. here [1812.06056] Small-signal equivalent circuit for double quantum dots at low-frequencies).

So, interestingly, in my case, it is actually an experimental fact that we get ‘unlucky’ with only seeing the transitions which vary charge as a function of a specific plunger gate voltage :^)

As an example, here is such a scan measured with both the ‘left’ (L) dot’s and ‘right’ ® dot’s resonator simultaneously: 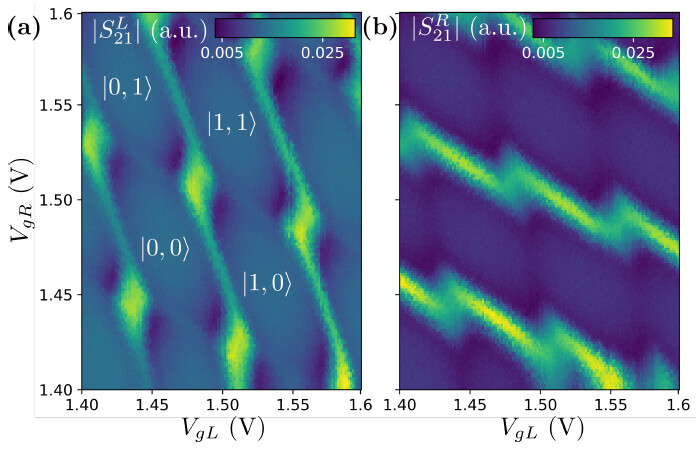 Here you can clearly see that each resonator’s signal is only sensitive to transitions involving its coupled quantum dot.

If your goal is to just clearly delineate the boundaries between different charge states in a stability diagram, the energy difference between ground and first excited state is the quantity myself and colleagues often use for visualization, by the way (ignore that this is a stability diagram for a strange triple dot system): 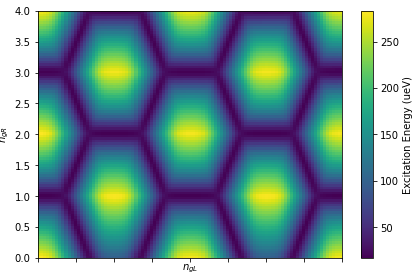 Thank you @cprosko! This is very useful perspective - and nice stability diagrams!

I’m a postdoc working in a spin qubit group. I could say that for most of us, we are not so much interested in the absolute value of the derivative, but mostly in any metric to delineate the edges of the charge stability regions. I’ve seen many ways to do this, including:

The distinction is usually important only when trying to extract physical quantities like tunnel coupling, or perform single shot spin/charge readout.